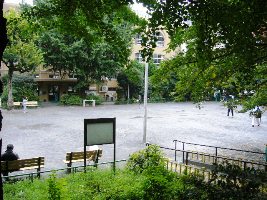 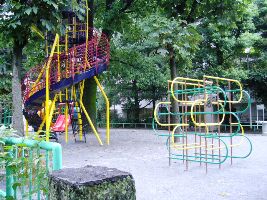 This multi-tier park dates back to the 20's. The grounds include a Japanese garden, a playground, and a major aquifer. It connects to the house of Marshal-Admiral Togo Heihachiro, arguably Japan's greatest naval commander who decisively crushed the Baltic fleet to win the Russo-Japanese war. A count in Japan, and the bearer of honorary knighthoods in Italy and England, Heihachiro was convinced he was the reincarnation of Horatio Nelson. An impressive leonine statue guards the site of his residence.
（Now , this park is provisionally closed because of construction.）